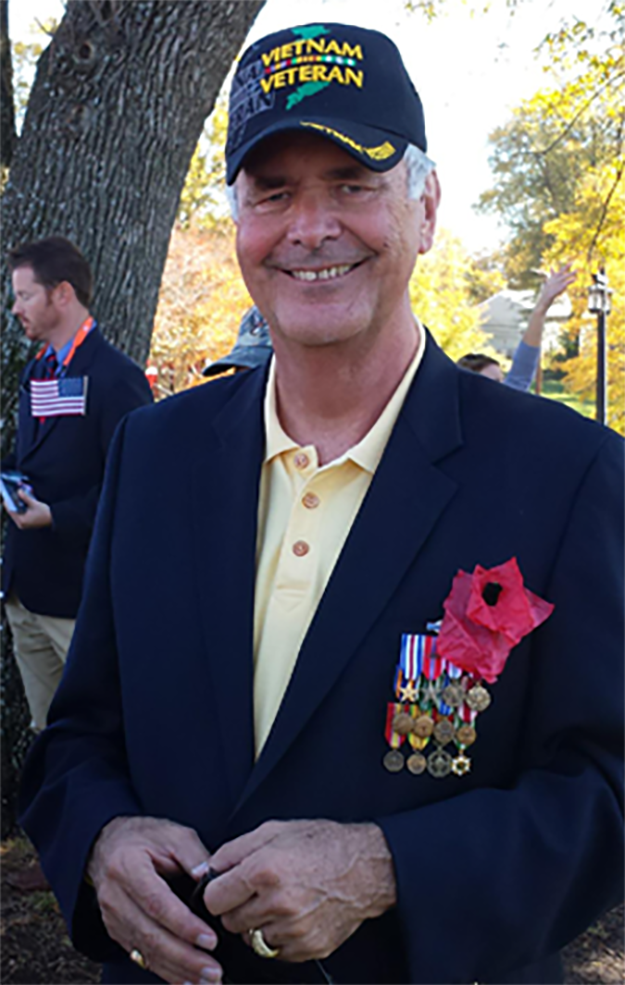 John graduated from West Point and holds a Master’s Degree in Asian History.

During 24 years of service other assignments included duty as an ROTC instructor, selection to be a Foreign Area Officer (FAO) with a concentration on Japan; service on the staff of Headquarters, US Forces Japan; a Company Commander and Deputy Brigade Commander at Ft Benning GA; and as the Inspector General of the 5th Infantry Division and Ft. Polk, LA.

After retiring from the Army John worked for Raytheon Corporation for 17 years which included 10 years in Japan. John has been President of the 501c3 “Welcome Home Veterans” since May 2011 and is currently the Executive Director. He is married to Margie, a realtor and broker in the Lake Norman and Charlotte, NC area and has 3 grown children, Chuck, Brian and Marcia.

Reading “From the Shadows” by John Hedley, my best friend in this whole world, was an experience I anticipated since the moment I knew John was writing it.  John and I have been close since high school, and I love him like the brother I never had.  And in every respect he IS my brother as he is my brother in arms.  So if I am a biased endorser, then one needs take that bias in context.  I read and internalized every word from John’s first book “Saddle Up; the Story of a Red Scarf”.  I shared many of the experiences recounted in that book, and John’s engaging writing style kept me on the edge of my seat from beginning to end.  And from my own experience as a USAF O-2 Forward Air Controller (FAC) in Vietnam during 1971-1972, I related to his stories from his year in country.

“Saddle Up” was an excellent book that took me out of the security of my O-2 at 1500 feet and immersed me directly into ground combat.  I smelled the smells, heard the sounds, and felt the emotions of the infantry soldier.  John’s writing in “From the Shadows” goes to a new level.  The dedication must be read and re-read again and again.  God is writing the dedication through John’s hand.  The words aren’t from the brain; they’re from the heart.  No, they’re from the soul.
… selfless service in a war the country had already determined not to win….”

I saw this phrase only once in the book, but it could have been written hundreds of times
“…..what better statement of service…..”

John dredged up his past demons to write and publish “Saddle Up”.  It was a lifetime’s catharsis reliving and re-experiencing the pain and stress of those days.  That one book was enough for one person in itself, but John determined to do it again – not for his own healing, but for the healing of others; for a legacy to the Twenty.
“…..what better statement of service…..”

Using the writing of those who knew some of the Twenty better than he was genius on John’s part.  It ensured the legacies of those he did not know was at the same level as the ones of those he knew well.  It ensured their stories were all told by someone who felt the loss as deeply as those closest to them.  There is a temptation to consider the deaths of such men as tragic loss of what they could have achieved.  But in His way, God tells us to be thankful for what they managed to give us in their short lives.    As John could attest, getting into West Point is not easy.  Getting through West Point is even harder.  Both require the best that talented and accomplished people can produce.  High achievers must achieve more than they thought they could.  The contributions of these men are not measured by either quantity or duration of life, but by their lasting endurance. They gave more in a short life than many give in a longer time.  God calls no one Home before He has ensured their destiny is fulfilled.

Death is not a bad thing for those who die.  They go Home to God.  They go Home where there is total peace.  Death is felt and suffered on Earth by those who remain; those who grieve; those who mourn; Though the Twenty have gone Home to their eternal reward, this book guarantees their lives, achievements, and contributions will live forever.  If I’m not mistaken this perpetuity was John’s objective.